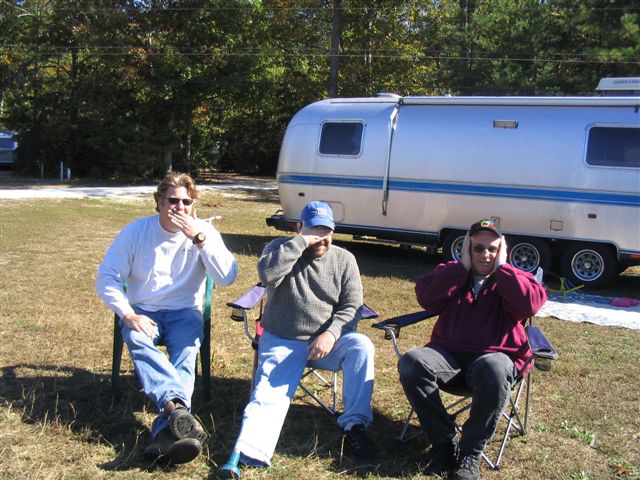 With fifty-two weekends in a year that are all occupied almost exclusively with having fun, one would be hard pressed to qualify one of those weekends as being the best.  For 2005, this weekend was my favorite.  However, leading up to the weekend the weather forecast was looking gloomy.  Weather.com was calling for rain on and off for most of it.

Here in the NJ, October 2005 went down in the record books as the wettest on record, with a monthly total for NJ at 13.22 inches.  The previous record was  8.20 inches in October, 1943.  The average amount of rainfall for NJ in October is 3.3 inches.  source: NOAA  With this being said, I had a fear that my buddy Steve (hear no evil) and his in-laws might back out of the weekend.  Why do I use the word fear?  Here a little backgrounder...

The Morrison's have been trying to hook up with the Dicker's for a camping weekend for more than a year and a half.  Of all of my buddies from growing up in White Meadow Lake, Steve (the Swiner) is the only childhood friend who got in to trailering.  A couple of years ago Steve and his wife Braith bought an SOB (some other brand) - a Coyote travel trailer.

For an SOB they got themselves a great trailer.  Steve and Braith's saving grace (non Airstream) in all of this is the fact that Braith's parents, Braith1 and Howie are proud Airstream owners of a 34 footer.  The tail end of their Airstream can be seen behind Speak No, See No, Hear No evil shown above.

The blame for not hooking up with the Dicker's for a weekend falls squarely on me and my work.  In short, I use our '78 Excella 500 as a remote audio recording, mastering, and CD manufacturing studio at music festivals up and down the East coast.  Typically, my money is made on the big music festival weekends of the season.  See DigitalSoundboard.net   Sadly, work has gotten in the way of us camping with dear friends.  UNTIL NOW!!!!!

In that we keep our two Airstreams at Jersey Shore Haven Airstream Park, one makes for an excellent guest house.  We invited another old-time buddy Al and his significant other, Kim to join in on the weekend fun.  And in spite of the gloomy weather forecast, and like the troopers they are - they showed up Friday night!

So the cast of characters for the weekend was my wife Katy and son Johnny, Steve and Braith2, Braith3 and their other daughter Jordan, Briath1 and Howie, and Al and Kim.  My Friday began early because I had to pick up our '78 31 footer from storage up in Northern NJ at Pleasant Acres.  Because I live in Northern NJ, this Park has proved to be a convenient parking place for our 'Bluegrass Express' between festival gigs.  I arrived at Shore Haven mid-day and parked the BG Express in the Parks Rally field.  This is also where our guests would be parked for the weekend.  The rally field area provides water and 30 Amp electric to the trailers parked there.  Soon after I situated our 31, Howie and Braith arrived with Braith3 and Jordan.  I'm sure you've figured this out by now - Braith1 is the Grandmother - Braith2 is the daughter, and Braith3 (or Braithy) is the granddaughter.  Howie pulled in the field and had his trailer door face my trailer door.  In spite of being parked backwards according to the rally field layout, Howie and Steve employed their handy 30 amp extension cords and were able to reach the utility posts with no problem.  Steve and Braith arrived at about 5PM and we (Howie) positioned their trailer perpendicular to my and Howies running between the two forming a U shape - kinda like almost circling the wagon formation. 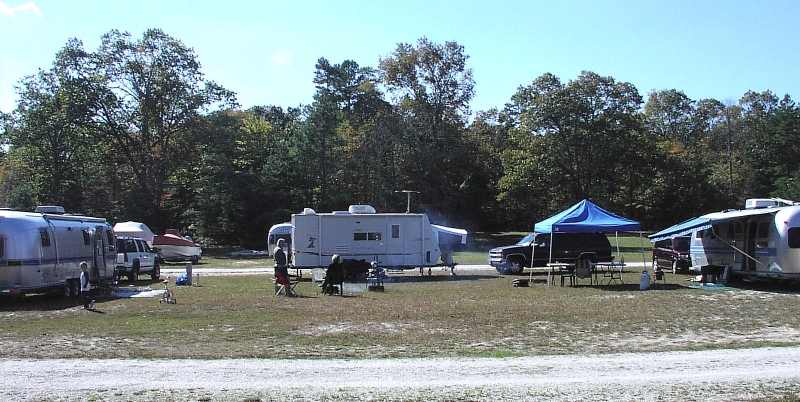 This proved to be one of the off-beat fun moments of the weekend for me.  Shore Haven has a fairly strict set of rules.  Like any successful 'commune', these rules are required to keep order among the member base.  It's the 'Order' of things I find appealing about the Park and why Katy and I have recently become shareholders (as of 2/06).  One of the rules of the Park is that SOB's are only allowed in provided they are sponsored by one of the shareholders and don't plan to stay for more than a weekend..  My good friend at Shore Haven  Al I stepped up to sponsor Steve and Braith for the weekend.  Al is one ingredient in the glue that keeps Shore Haven together and running as smooth it does.  Al's position is as 'Minister of Maintenance' at Shore Haven and he does an excellent job.  The grounds and buildings are always in excellent shape.

Well when Al came over to the Rally field he caught a glimpse of the wagon's in U formation.  Al claimed - 'this is not allowed!".  I assured him we had permission from the Park manager to set-up the trailers this way.  Keep in mind this was a rainy ass weekend at the end of October.  Shore Haven was a relative ghost town and our trailers were the only ones occupying the spacious Rally field.  The rules got bent and Al got over it pretty quick - I hope.  He and Howie became fast friends as they talked about their over-the-road Airstreaming experiences - both have taken their AS's up to Alaska.  I was reveling in their conversation as I'm an Alaska aspirant.  The conversation was also great in that I began to get to know Howie and Braith a little more.  I had only met them briefly once prior at Steve and Braith's wedding ten or more years earlier.  All I knew of Howie and Braith is that they throw one hellofa party.  Side note - Steve and Braith2 got married on New Year's Eve no less.

...And the intermittent rain continues...

As nightfall came upon us Friday night we had a campfire going.  Al and Kim arrived at about 10PM and Katy and Johnny pulled in at about midnight.  Good friends from the Park, Rob and Tracy stopped over for the campfire gathering.  They have two children, both around Braith3 and Jordan's age - the children all became fast friends and were hunting together for frogs and salimanders in no time.  I forget what we did for dinner that night.  I think Braith1 had turkey or chicken and warm soup going on in their trailer earlier in the evening - I just remember it tasting really good.

Saturday arrived and the intermittent rain continued.  Breakfast was served in Steve's Diner.  Eggs, bacon, coffee and juice, etc.  Nothing like a good hot breakfast to get things going on a cool damp morning.  After breakfast we made plans for the day - it was decided to head twenty miles south to Cape May to check out the painted ladies (Victorian homes that CM is famous for) and find a place for lunch.  Here we are outside the restaurant... 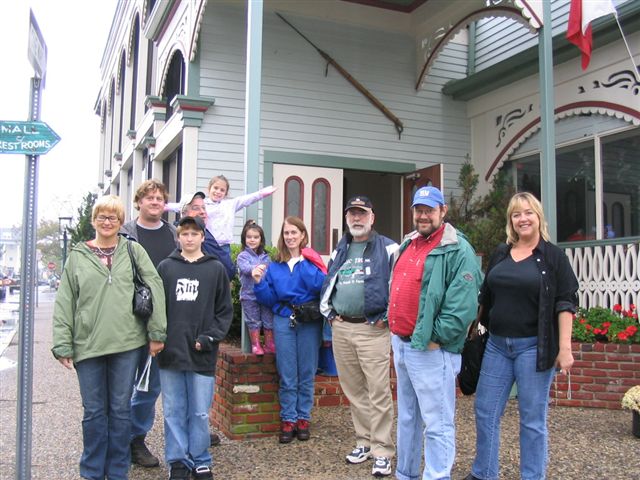 The painted ladies brightened up a dreary day.  Lunch was excellent and the restaurant (forgot name) was able to seat us all at one table.  Good people, good food, GOOD TIMES!  After lunch we strolled the shopping district then made our way back up the Parkway to Shore Haven.  We had to get back in time to prepare for Shore Haven's Saturday evening ritual - HAPPY HOUR.

I had forgot to mention the Happy Hour event to the crew leading up to the weekend.  I did some shopping Friday during the day for it - the usual prepared party platter from the supermarket.  Steve on the other hand and without a days warning - whipped up a spread of deli meats, cheeses, and veggies that was the nicest pot-luck Happy Hour food I've seen there in my brief one Summer of Shore Haven Happy Hour's.  He's amazing!

Happy Hour was fun as all of the Shore Haven regulars wanted to chat it up with the newbies.  A good and libatious event.  From HH we rolled right into our groups dinner preparation.  The Saturday night dinner menu was pot-luck.  More steaks than we could finish were cooked on the grills, I worked up a potato side dish in the dutch oven that was cooked over the open fire.  Al put together a summer squash mashed combo cooked on the big gas burner.  To me it was the dish of the evening - steaks were out of this world and made better with Al's squash dish.  SO GOOD!  My laborious potato dutch oven dish was way more work and time for the end result - a tasty potato dish.  Next time I'll try cooking a desert in the dutch oven.

Saturday night brought on more campfire action of roasting marshmellows and making smores and was the close to a wet but wonderful day.  Sunday we actually woke up to SUNSHINE.  Imagine that.  Everyone went about are busy business of packing up and the crews were on the road home by mid afternoon.

I've already mentioned what a great weekend this was.  It wasn't great because of the wonderful surroundings of Shore Haven or the weather - it was great because of the PEOPLE involved.  There's nothing like getting together and spending time with old friends you've know since nursery school and their extended families.  Talk about inherent lack of pretense.  THAT why this was my favorite weekend of the year.

I'll Drink To That!

Here are a couple of Howies links: