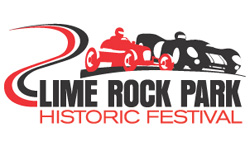 Good things come to those who wait.  In 2009 I lobbied hard for us to attend the vintage car races up at the Lime Rock race track in northwestern CT.  For a myriad of reasons it did not work for us in 2009.  Now fast forward to the Summer of 2010, the vintage races at Lime Rock was going to work for us!  This was a vintage race weekend so the natural choice of rigs was the 1964 Trade Wind.  With campsite and weekend tickets paid for in advance, but not actually in hand, we proceeded up Rt. 22, did some last minute food shopping along the way and then arrived at Lime Rock at 6pm.  In total, it was about a two and a half hour drive from North Jersey to the track.

After a stop at the Will Call booth we secured our wristbands and we were on our way to site 12 which is located on the back straight with twenty feet of grass between the Airstream and pavement.  It is worth noting that Lime Rock only offers boon dock style camping.  You have to arrive with the fresh tank full and the black tank empty.  It's worth noting that we are camping on grass.  I had the blue boy out and it was looking as clean as the day I bought it.  The first impression upon arrival was the proximity to the race track from our campsite...it was incredible!

Friday night had us setting up camp and working the new awning into the slot.  This was only the second time setting it up and I can tell you it goes a lot easier with an extra set of hands and a little silicone sprayed into the awning slot.  In true RVing fashion, our new neighbors were flocking from all directions to help out.  Access to the trackside camping opens on Thursday for campers which give them a chance to set up early and watch the Friday practice laps.  We were actually one of the last RVs to arrive for the weekend. 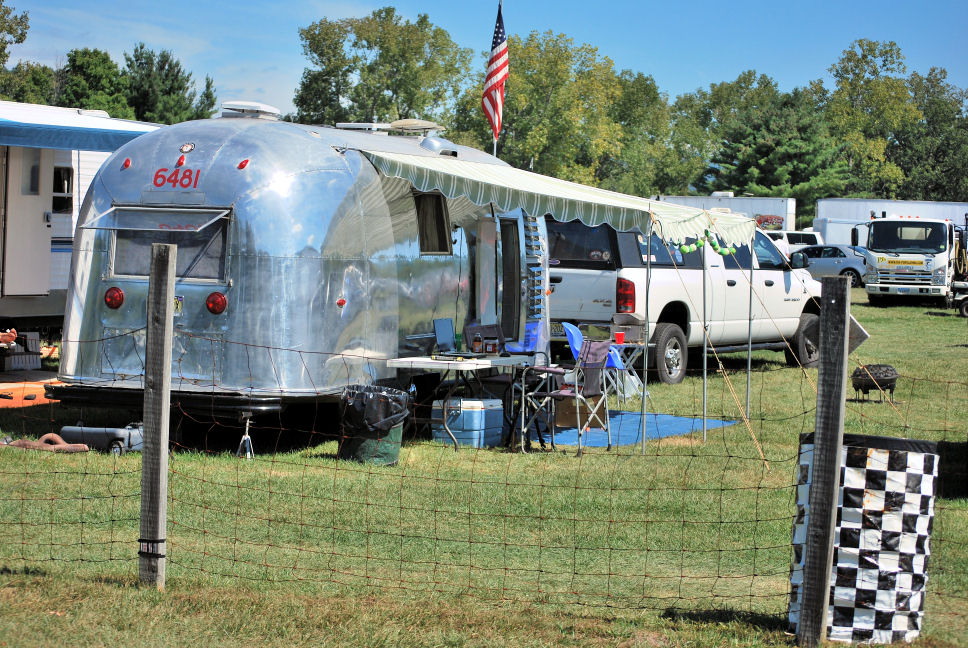 Once camp was set up, we were given a tour of Lime Rock so to aquatint ourselves with the layout of the track and the facilities.  Richard and Robert Lees, our neighbors on one side, were the gracious tour guides.  We walked down to the paddocks to take in the sites.  For the uninitiated, the paddocks are the race cars temporary garages for the weekend.  At Lime Rock, the fans have access to the paddock area and are free to roam in and out of garage areas as you like.  I am told the access for race fans at Lime Rock is unmatched.  After our most welcome tour of the grounds, we set about happy hour which was to roll right into dinner.  The Friday happy hour snacks wound up being enough for us.  After some more campsite hopping and socializing we called it an evening.  Much to Robert, our teenage neighbor's chagrin, we skipped the Friday night campfire and hit the hay relatively early.

We woke Saturday to the sounds of race cars going by just outside our window.  What a wonderful alarm clock.  The Saturday race schedule called for several qualifying laps followed by twelve races scheduled for the day.  As you will see in the accompanying photo albums here, Lime Rock sets up ten different groups of cars that race each other.  The groups consist of Pre-war Sports and Racing Cars, my personal favorite, 50's Competition Cars, Porsche 911 & 914's, Best of British Production Sports, Big Bore Production, and a number of other groups.  The individual races each last on average about fifteen minutes, which gives us the race fans a chance to see each car about fifteen times as they work their way around the 1.59 mile road course.

First order of business on race day was to set up our photography stands along the fence line just outside our trailer.  The platforms were not needed as we were literally up against the track but the additional height offered a bit better photographic perspective.  From a picture taking standpoint, LR rocks.  The cars are inherently photogenic coupled with access that has you close to the action makes for a photographers dream.  I took nearly one thousand photos on Saturday.  This is how it went for me - I had the laptop setup on the table under the awning.  A fifteen minute race would happen, a snapped a hundred or so photos, then I would run back to the campsite, dump the photos on the the computer, give them a quick look and see what setting adjustments should be made, then run back at shoot the next race.  Such a good time and fun way to spend the day. 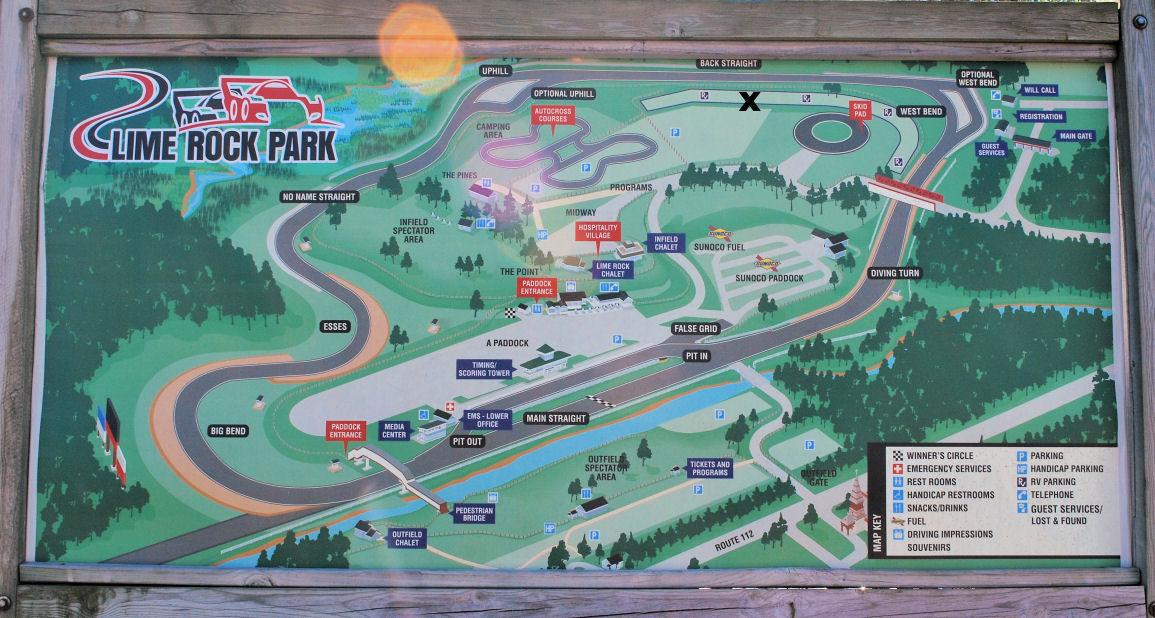 We broke-up all of the picture taking with an afternoon saunter to the food and vending area and paddocks.  LR featured 'A Taste of Litchfield' for the first time.  Local restaurants set up booths and sold good tasting food.  From what we understand, this was a big step up from the food that's been offered in years prior.  This race fan can tell you that the Lobster in mac and cheese was delicious.  From lunch we perused the t-shirt, flag, books, video and art offerings.  We followed that with a walk through the paddock flea market.

After the races on Saturday, LR opens the tracks for walking and biking.  We jumped on the bikes and road the course.  I fared much better on the LR course than I did years prior at Laguna Seca.  That is another story for another time.  Let's just say that I washed out in the cork-screw on that track...on my mountain bike!  Saturday evening had us enjoying happy hour which rolled into firing up the grill.  Menu for the night has us enjoying three different seasoned chicken kabobs from Whole Paycheck.  Delicious!  Dinner was followed by a Saturday night campfire (had to be in a raised campfire pot) which had neighbors from both side enjoying with us.

There is no racing allowed on Sundays at Lime Rock.  There is a local ordinance that calls for quiet on Sundays.  So Sunday is car show day at the track.  Over seven hundred cars poured in to LR and set up around the track to show off their stuff.  The show is laid-out primarily by make of car with the best of show autos lining up along the main straight away.  We started off at the Rolls Royce's which were followed by the Citroens, then the Jaguars.  Down the way were the Lamborgini's followed by the Farrari's.  Best license plate in the Lambo section was - NZO-WHO. 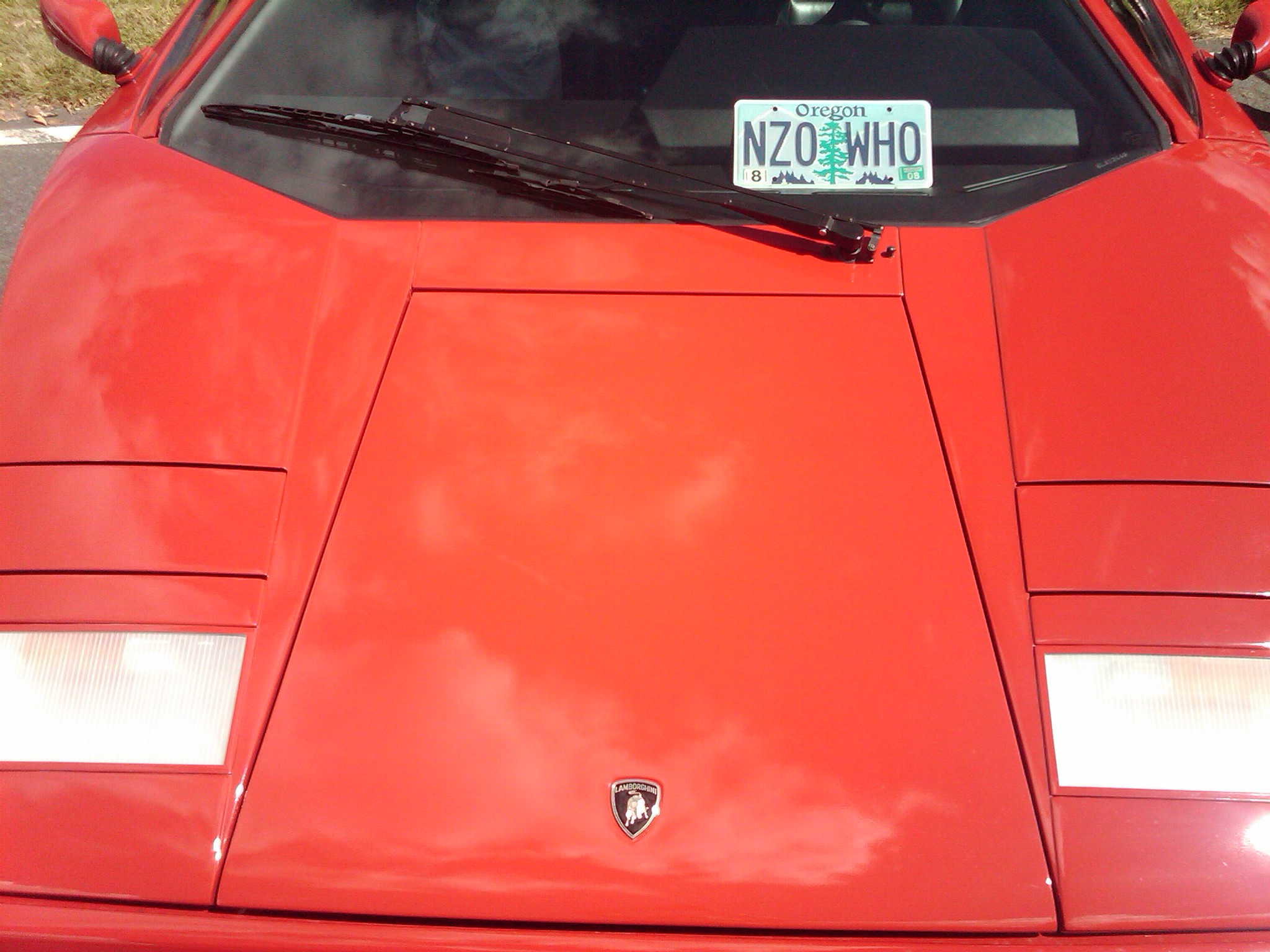 Moving along were the BMW's, Mini's, then the largest collection of Cobra's I've ever seen in one place.  Not sure if any of them were actually real 1960's Cobra but they looked awesome all in a row.  I can tell you one was being sold for the modest sum of $56k.  Not a bad price consdering the fun factor of holding on for dear life.  Then the Ford GT's followed by the Swedes, which were followed by the Porches.  At this point we are at turn 1 and approach the front straight. 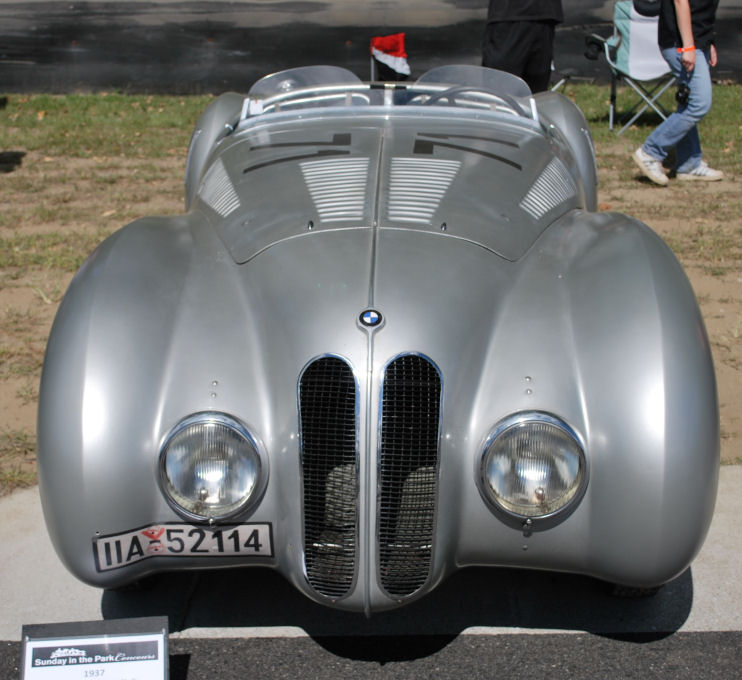 In front of us down the straight was the judges best-in-show cars.  My words can't describe the overall presentation.  At this point I can only suggest check out the car show photo album.  I will let you the reader conjure up your own words here.  After taking in the show, we made our way back to the campsite to get ready for a side trip over to Litchfield to visit with Aunt and Uncle for dinner.  Mmmm - pizza and beer at Bohemian Pizza in Litchfield.  After a wonderful visit with aunt and uncle, it was back to LR for the Sunday night campfire and revelry.  We spent the later part of the night hanging with our new Airstream friends who happen to own a David Winick - 75th Anniversary edition trailer - my most coveted Airstream.  It was fun listening to hard core car guys go off on racing, fast cars, car customers, dealers, etc.  The comedy encompasses every angle of buying, selling, and fixing fast cars.  Really fun conversation.

Monday morning brought with it the race car alarm clock.  Monday was pretty much a repeat of Saturday from a race stand point.  I spoke with a few seasoned racing photographers and got some good pointers.  We did another walk through the paddock area.  Then we got busy with the sad part of the weekend...breaking down camp.  After our good-byes and see you again next years, we made out way out of the infield towards home.  This weekend ended my streak of Airstream every weekend but one from Memorial Day through Labor Day.

What a wonderful and fitting end to an amazing Airstreaming summer.  Lots of new friends were made over the summer and plenty of good times were had with old friends as well.  This experience sums up well my love for Airstreaming.  New adventures with every outing and the view out the window is always different.


Back to Morrison's Airstream Page