What a weekend!  Friday night we took in Gov't Mule at the new Atlantic City House of Blues.  This was the first show at held at HOB's newest venue.  After the show my buddy and business partner DT, won big at the HOB's craps tables - he cleaned up playing the 'Field' section of the table.   Plans had us going back to JSH to sleep at our Airstream and wake up the next day and head home to our various responsibilities.  Well...when we woke the Sun was shining and the JSH pool was beckoning.

Departure plans were delayed until after our pool time was over in the late afternoon.  While there, the evening's Happy Hour party at the pavilion was announced and pizza slice orders were being taken.  Okay...we'll head home after the pizza dinner at the pavilion.  Sat nights Happy Hour lived up to it's name and was made happier by our margaritas and great cheer being shared by all the Airstreamers present at the gathering.

In the context of being social I happened to strike up conversation with Stanley a fellow Vintage Airstream owner.  Stanley's trailer is a custom 1957 23 footer and in an entirely different class of trailer from our beloved Bluegrass Express.  In talking with Stanley he went on to explain that the trailer layout was designed by his folks back in '56.  The custom feature in '56 was a $185 option to the trailers price tag.  Wonder how much something like that is charged by Airstream today?!?!? 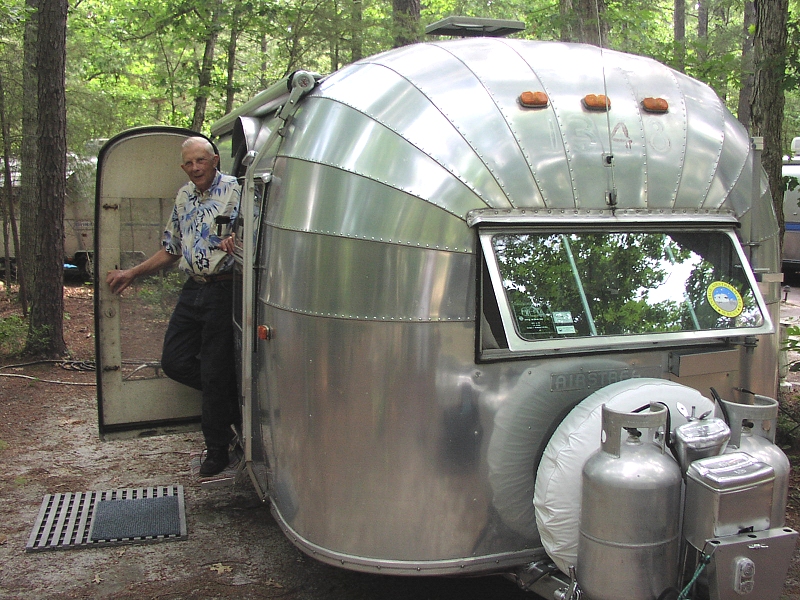 Stanley and his 1957 Custom

Our conversation lead to an invite back for a tour and oral history of the trailer.  Stanley shared that his folks were participants in the 1958 Mexico Rally with this very trailer.  In the early '70 Stanley's parents passed the trailer down to him and his wife Florence.  I'm here to tell you there cannot be a better care taker for this trailer in the world.  Stanley by trade was an industrial designer.  He has applied his expertise to maintaining and enhancing this '57 Custom in a number of ways.  All the additional custom work he has applied to the trailer is factory quality in every regard to fit and finish.  Note the flag holder in the image above...hand made by Stanley.

The tour of the trailer's exterior and interior was an Airstream history buff's delight.

As if this experience could not have made Saturday night a great evening in itself, just across the road from Stanley '57 was a 2004 CCD!  Stanley had never been in one.  I scored an invite to check out that beauty at Happy Hour as well.  It was fun watching Stanley and Florence taking in this new fangled...and destined to be a classic...CCD.  Old and new - parked side by side.  That's what Airstreaming and Airstream Parks are all about.  See the CCD below... 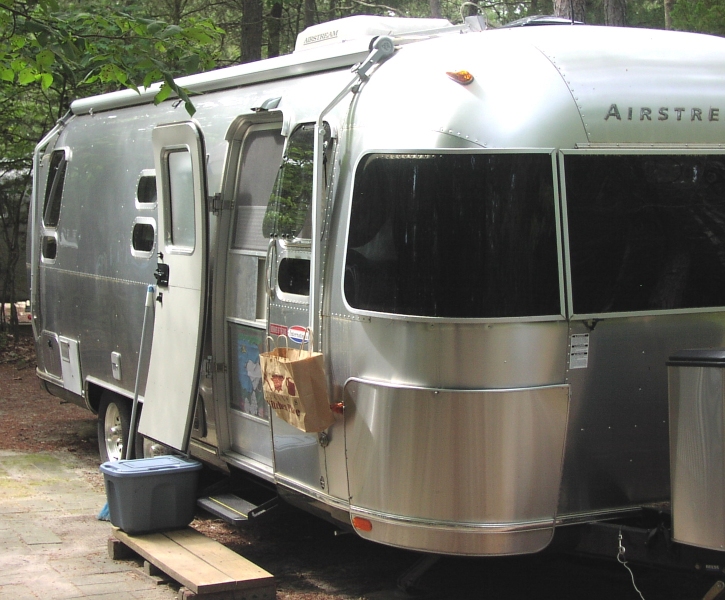 Needless to say, all the socializing that went on after dinner Sat night kept me and DT at the Park until Sunday.  I did make it home in time for my daughters cheer leading party that my wife and I hosted in our backyard that day ;-)